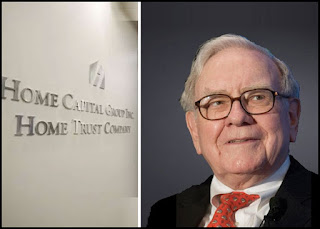 A lot has changed since Warren Buffet decided to invest in Home Capital and the Canadian housing market.

The billionaire’s company, Berkshire Hathaway, gave the beleaguered company a $400 million cash infusion along with a $2 billion line of credit.

Prior to this, Home Capital was in challenging position, predicated by a damaging allegation in April that the company had misled its shareholders by disclosing too late that an internal investigation found evidence of fraud and had cut ties with 45 brokers. Although the alleged non-disclosure had occurred at least two years prior, and the company’s business fundamentals were solid, the effect was immediate -- account holders started to withdraw their money, which resulted in a small “run” on deposits.

Shareholders started to sell, resulting in a drop in share price. This phenomenon also spread to a few other alternative lenders in the market, who also saw their share prices fall, for no apparent reason.
While the Home Capital controversy shook up the market somewhat, and fed the rumour mill with talk of bubbles, etc., none of that has come to pass.

Based in Toronto, the publicly-traded company offers mortgage lending, deposits and credit cards through its principal subsidiary Home Trust. Ninety per cent of the Home Capital’s business originates from uninsured mortgage clients who are turned away from traditional Banks.

As one of Canada’s largest alternative lenders, the company is an important player in the country’s housing market. A niche-market lender, Home Trust was one of the go-to lenders that mortgage brokers used for self-employed borrowers as well as those with some damaged credit. When the crisis occurred, brokers had to quickly find other mortgage lenders to take up the slack.

If Home Capital was a bigger player in the market, there could have been dire consequences. Its mortgage loan portfolio is approx. $20 billion compared to the $1.1 trillion in residential mortgage loans of the Big-Six banks.

Was there a real issue?
Most analysts acknowledged that the underlying fundamentals of the company were steady, although the allegations created uncertainty.  Mike Rizvanovic, an analyst with the Veritas Investment Research in Toronto said in a Financial Post interview, “This is a very peculiar situation where Home Capital has no issues around credit, and no issues with a capital shortfall. Yet they are being decimated in terms of their viability as an ongoing entity.”

Clearly, Warren Buffet agreed.  Not only does his investment put much-needed capital into Home Capital, it was also a strong endorsement for the company.

“Home Capital’s strong assets, its ability to originate and underwrite well-performing mortgages, and its leading position in a growing market sector make this a very attractive investment,” said Buffet, Berkshire’s chairman and chief executive officer, in a statement.

The Buffet Factor in Action

Almost immediately, Home Capital shares went up. Other alternative lenders also saw their shares recover. Depositors are coming back, lured somewhat by an excellent interest rate on deposit accounts.
The other immediate effect was increased confidence in the Canadian housing market as a whole. Many mortgage brokers were forced to find alternative lenders when Home Trust depositors began pulling out their money, leaving the company with a liquidity problem. Mortgage brokers have now begun referring business to Home Trust again.

Posted by The Mortgage Group at 08:15