Negative interest rates and you 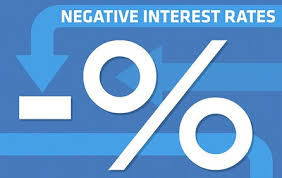 I have a great deal for you – give me $100 and I will give you back $99. No? Well, that would be the result of a negative interest rate scenario The Bank of Canada’s  (BoC) Stephen Poloz has alluded to as an option  in case of another global  economic crisis. We’re not there yet and it is unlikely we will ever get there, but if we did, it’s not likely consumers would be impacted in a big way.

If banks were to keep borrowing from the BoC, they would be paying for the privilege of doing so. The idea is to force the banks to be more liquid. Instead of saving, they get a financial return by using more of their funds for loans.

It’s not a “normal” response to an economic crisis but a few countries have gone there recently – Denmark, Sweden and Switzerland, for example. The BoC has other tools and the new government is working on a stimulus package that will likely help get the country growing again.

Loans may cost less but loans wouldn’t necessarily be easier to get -- consumers would still have to qualify. And unlike in Denmark, where some banks are paying mortgage holders a small monthly interest on their home loans, that is not likely to happen here.  Also, if rates did go sub-negative, it likely wouldn’t mean added banking fees for saving-account customers either.  If that were to happen, consumers would just hoard their cash.

“The lower rates go, the more likely you are to spend,” said Carlton University economics professor and monetary policy expert Nicholas Rowe in an interview with Global News. And low interest rates stimulates the economy because, “it’s a big encouragement to go out and spend your money,” he added.

As for mortgages, the variable rate might be affected but fixed rates are depended on the bond market.  In fact discounts from prime on variable mortgages have actually decreased significantly in recent weeks. Encouraging home ownership is good for the economy overall because when people buy homes, they also buy other goods for that home.

There are two reasons to cut interest rates: to stimulate the economy through increased borrowing and consumption and to devalue the currency to boost exports.

There may be some good news on that front.  Many Canadian economists expect good news in the upcoming months.  Although it has taken longer than expected for the economy to depend less on the oil sector and more on the manufacturing sector, growth is expected in 2016 and 2017.

A lot is riding on the federal government’s new stimulus package, aimed at kick-starting a sluggish Canadian economy. Although the details have not yet been released, BMO Capital Markets thinks it will lead to economic growth. They crunched the numbers and say, at best, “stimulus would lift GDP growth by a bit more than 0.5% next year.”

Posted by The Mortgage Group at 06:19