NDP in Alberta?? Say, what now? 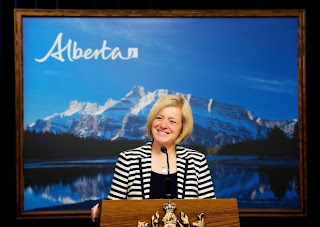 Wow, this time last year someone might have thought to have you locked up if you said there would be a NDP majority in Alberta.  Yet, here we are mid-May, after the May 5th election dust has settled, and we find ourselves welcoming in new Premier, Rachel Notley, of you guessed it - the NDP.

While the election results may have been shocking enough to gain attention on a national and even international scale; a closer look at the political landscape in Alberta would show another story.  Rumblings that the 44-year privilege, the PCs believed would stay forever was about to crumble, were being echoed throughout the province.

After six years of governing a financially booming province, the then current PC government not only handed down an un-balanced budget but also gave Albertans a budget that proposed legislation with significant increases to Mortgage/Land Title fees, further cuts to essential services and front-line staff in both the medical and education sectors.  We were told to brace for tough austerity.

We then witnessed (now former) PC interim leader Jim Prentice call a premature election to secure his leadership spot - this election was to cost the Alberta taxpayers an estimated  $30 Million Dollars.  Uhm, what?  We Albertans took to the polls and with an unprecedented move removed the longest (provincial/federal) run in government in Canadian history.

The election results said that while change is frightening we were no longer willing to go with the "devil we knew".  We took the NDP from a mere four  seats in the legislature to a majority government with a resounding 53 seats.  While some are pleased, some dejected, and perhaps more still indifferent, we are all going to have to live with the outcome.  This "new" cabinet and lack of experience has many Albertans fearful.  While the cabinet is a group of "newbies", Rachel Notley herself is not.  She brings a strong sense of leadership and her team brings with them a message of hope, renewal and positive change.

Our political landscape may be changing, but what makes us uniquely Albertan has not.  Our "Alberta Advantage" is not borne from the luck of geography alone, our greatest resource has and always will be the great people of this province.  Yes, we are blessed to have one of the richest oil patches in our backyard and lucky for us that doesn't change either.  Oil is going to continue to be an important resource for the foreseeable future -- we have lots of it – and the infrastructure and foresight to get at it and distribute it.  We are an entrepreneurial-spirited bunch. We work hard work and we play hard and that is not going to change either; regardless of the flag colour the governing party flies.

And while we may be nervous of what a change in government may bring, we are willing to take the chance on some fresh faces, new ideas and the inspiration it can bring.

Notley's first act was to extend an olive branch to the energy sector.  She promises to work closely with energy-industry leaders to re-write Alberta's system of royalties and environmental rules over the next four years.  She has promised to cancel Prentice's increases to Mortgages and Land Titles (certainly good for all us in the Mortgage Industry).  She has promised significant investments in health care and education.  She pledges to freeze post-secondary tuition fees, expand public home care and include school lunch programs for kids in low-income households.

Now it's just a question of how she's going to pull it all off?
Posted by The Mortgage Group at 07:52