This is a recession in the 21st century 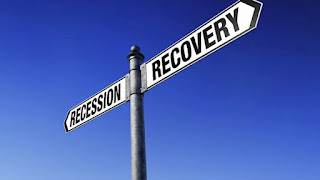 The past few weeks we’ve seen the dollar sink, the Bank of Canada’s rate drop to .50%, and not-so-great economic reports over the last two quarters have been released.  And with all this comes discussion that Canada is going through a…(whisper) recession.

According to the definition of a recession -- a period of temporary economic decline during which trade and industrial activity are reduced, generally identified by a fall in GDP in two successive quarters – that’s what we’re experiencing. However, this seems to be a very different downturn than previous recessions.  And because the definition puts us squarely in one, it doesn’t mean that the country is slipping into serious economic trouble.

David Madini of Capital Economic said, “The recession may not last much beyond the middle of this year (2015).

Here’s some of the key data.  According to Stats Canada figures, the Canadian monthly trade data are now back to pre-2008 levels. However trade data and deficits are simply movements in capital and may not be the best indicators of the economic health of a nation. The U.S has been in a trade deficit for four decades without much harm – in fact, they seem to have prospered well through it all.

This may be the best recession ever. Or perhaps this is what a recession looks and feels like in the 21st century. Some economists are now suggesting that, although by definition, Canada is in a recession, the two-quarters rule may not be the best test.

During the recession in the early 1980s Canada experienced higher inflation, higher interest rates and high unemployment.  The Bank of Canada rate hit 21% in August 1981, and the inflation rate averaged more than 12%.

Canadian companies no longer focused on innovation and productivity improvements – they were in survival mode.  Also, high inflation was partly responsible for larger government spending. In the early 1980s, Canada’s unemployment rate peaked at 12%. It took almost four years for the number of full-time jobs to be restored.  Real GDP declined by 5% between June 1981 and December 1982. By 1979, the Canadian dollar was worth 85 cents U.S., which made U.S. imports more expensive. On the other hand, Canada’s major exports declined in price. Combined with high inflation, and interest rates, these high commodity prices reduced the standard of living.

Pretty grim picture. Now fast forward to today’s recession. The inflation rate remains in check at 1%. Canada’s unemployment rate is approx 6.8%, which is considered normal. The Bank of Canada rate is .50%. There is an entire generation of Canadian who have never experienced high interest rates -- today’s low rates are the norm for them.

After the June employment figures were released, Scotiabank released a report suggesting the country was not in a recession “in any meaningful or broadly defined way.”

Some have billed it the Great Canadian Non-Recession.

Technically, we may in a recession and those in areas impacted by the downturn in the oil industry may be feeling it the most, however, consumers are purchasing big ticket items and home sales were up 3.1% from April to May.

So what’s going on?  Is this a true recession? Or, is this what we can expect future recessions to look like going forward? Perhaps the definition of a recession needs to be updated. The world has certainly changed in the past three decades. Some of the credit has to go to government policies. Policymakers have lived though previous recessions and have put safeguards in place to ensure old scenarios are not repeated.

But more so it might be that just two quarters data numbers is not enough anymore. Douglas Porter, chief economist for BMO Financial Group, says it’s too early to declare a recession – that there are some other indicators such as the three “Ds” – depth, duration and dispersion -- which have not been met yet.

Whatever Canada is going through at this time, it has not had a negative impact on most households… and really, that’s all that matters.